Love it or hate it? My take on "Outliers- The Story of Success" 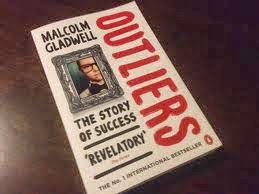 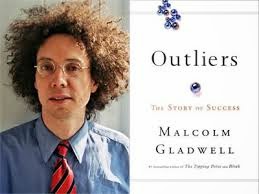 Gladwell Malcolm's book "Outliers- The story of Success", is one of my FAVOURITE books for many reasons. I once went for an interview with the Managing Director of a top Kenyan insurance firm, and during the interview he asked me "Do we work because we love what we do or we are forced to because of circumstances/ commitments?"After I gave him my answer he asked me "Have you read the book Outliers?" To which I shamefully replied I hadn't; I wasn't much of a reader then.


Well, I made a mental note to myself to read it. And months later I got a hold of it, and read. I loved it, every bit of it. It isn't one of those books written to give you the answers you are looking for. Far from it. Infact after reading it, it leaves you with more questions than you had. I believe that is the true mark of a good book. It gets you thinking, almost pushes you to think outside the box, question what you previously thought; it DOES NOT OFFER a solution, but makes YOU look for one instead.

Who or what are outliers?
out-li-er \ - , l ï(-9)r\ noun
1. Something that falls outside the main body or group that it is a part of
2. Someone who stands apart from others of his or her group

Why do some people succeed far more than others?" In Outliers Malcolm Gladwell argues that the true story of success is very different, and that if we want to understand how some people thrive, we should spend more time looking around them — at such things as their family, their birthplace, or even their birth date. The story of success is more complex — and a lot more interesting — than it initially appears. Intelligence and ambition count, but they arent the only factors.

The lives of outliers — those people whose achievements fall outside normal experience — follow a peculiar and unexpected logic.
Malcolm introduces you to one kind of outlier after another: to geniuses, business tycoons, rock
stars, and software programmers. He attempts to uncover the secrets of a remarkable lawyer, look at what separates the very best pilots from pilots who have crashed planes, and try to figure out why Asians are so good at math. He argues that there is something profoundly wrong with the way we make sense of success.

What is the question we always ask about the successful? We want to know what they're like—what kind of personalities they have, or how intelligent they are, or what kind of lifestyles they have, or what special talents they might have been born with. And we assume that it is those personal qualities that explain how that individual reached the top.

It's not enough to ask what successful people are like, in other words. Malcolm argues that it is only by asking where they are from that we can unravel the logic behind who succeeds and who doesn't.

Malcolm speaks in detail about some topics which I found SUPER interesting, I'll pose them as questions so you think about them:
1. The Matthew Effect
Is Success the result of what sociologists like to call "accumulative advantage."? Is it those who are successful who are most likely to be given the kinds of special opportunities that lead to further success? Does this begin to create a gap between them and others, and does this gap only keep growing? Think about it.

4. The Ethnic Theory of Plane crashes
Are Planes safer when the least experienced pilot is flying, because it means the second pilot isn't going to be afraid to speak up if things go wrong? Seems not to make so much sense right?

5. Rice paddies and Math tests
"No one who can rise before dawn three hundred sixty days a year fails to make his family rich"
When it comes to math, do Asians have a built-in advantage? 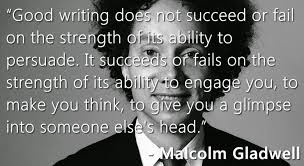 This, if you ask me, is a brilliant book. Even if you aren't much of a reader or thinker, this book is FOR YOU. You might love it or hate it, but its worth a read.

Let me know your thoughts.